I started in 2002 when I was suffering from Insomnia. I was going through big changes in my personal life and the relationship. I was in was slowly falling apart. At this time I was traveling around quite a lot, staying in hotels and renting other peoples homes.

Trying to save the relationship we rented a large stylish apartment, hoping that the change of scene would have positive effects. The new spacious living situation made the inevitable break even more obvious. I felt a strong need to capture what was going on around me. Not being able to fall asleep, I started photographing my partner and myself every night, placing a view camera in front of our bed.

The insomniac state that I was in caused me to feel a disconnect to my own body and I felt as though it was floating around in the room, without gravity. Photographing it became a way of proving that I was actually there. The routine of making one photograph each night, was important to me at the time of making, as I felt a sense of control, hence the reciprocity failure which occurs when the film media starts acting in surprising ways due to very extended exposures. 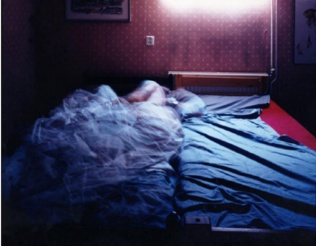 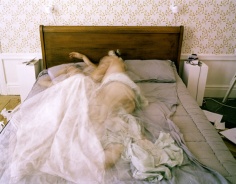 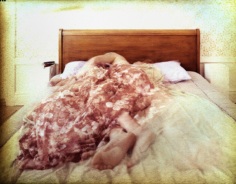 I am interested in exploring the familiar domestic space, with all that it encompasses, moments of intimacy, connection and sometimes those other moments of feeling disconnect, loss and displacement. I have used myself as subject and spectator as I am fascinated by the boundary between spectator and subject and mirroring. Psychological ambiguities become visible when memory meets fantasy and when love and intimacy encounters longing and disconnection.